The man wearing a hat

This man, wearing the hat, this man who can set the entire world on fire,
a kraken….

Everything will be destroyed along his starved and burning coastline,
childhood, birds and even dreams

This man truly reminds us of a mythical monster, starved and furious,
as extinct dinosaur, revived in the shape of something that has never been there before.

Is it about an exposition? No – a room was to be debated. A wave rolls through this room. A wave of sea and tears. Its water is salty, gnawing at the construct of culture. The wave’s movement is generated by those who upset us and our notions of humanity. We barricade ourselves not only along the European outer borders but defend all territory by means of language ability: Hence, we call them “refugees” rather than “human beings”, therewith executing their social exclusion and outlawing. Those who have barely escaped the dangerous sea, are threatening us. Hence – as soon as they reach the shore – we assign the exact same phenomena to them, that are commonly used when referring to the sea – the most dangerous and most powerful element (G.W.F. Hegel) – threatening the life of man: the wave becomes a “wave of refugees”, a “flow of refugees” bursting its banks and flooding national borders. Not even a denouncing “tsunami of refugees” is proscribed.

Within these boundaries, the MEK has made room for KunstAsyl and authorized us to act. Participation was not presented as an act but radically carried out. Space within the museum became a place to perform and transform. Differences were not set aside, they were permitted. Within the museum, Europe presents itself as competent.

Those, who started to (re-)construct their home within this space since March 2016, used to live in Albania or Afghanistan, in Kosovo or Pakistan. The remains of their houses are located in Syria, Iraq and in Bosnia. They survived bombs, dictatorship and terrorist outrages. Some escaped prisons, others set out to disrupt the vicious circle of poverty. Most of them had nothing left to loose but life itself.

Those people would map routes on the walls. Neither GPS nor compasses served their wandering souls as a guide. When the sky came tumbling down, north was no longer north. They had documented incidents, the horror of war and flight with their cell phones. In the museum, they would trace its essence by means of sanguine. Their inscriptions on the walls are no written records from the past but an expression of current memory. Parts of discharged bedsteads from emergence accommodation became constructional elements. Now, an upside down bed is rocking like a boat. Its slatted frame turns into the spine of a lost home: glances into fugitive lives.

“I never made a painting as a work of art, it’s all research,” Pablo Picasso is quoted (i.e. Frederick Baker, 2016). Within the museum, it was not canvas but space, that was to be researched - artistically, physically, socially, and historically. The process deprived itself of customary categorization. The mode of expression was granted.barbara caveng | translated by Carina von Krosigk 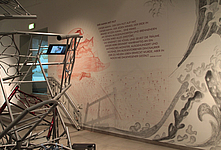 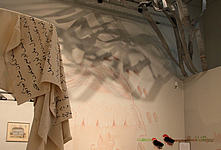 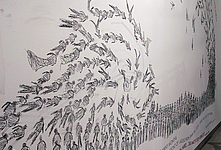